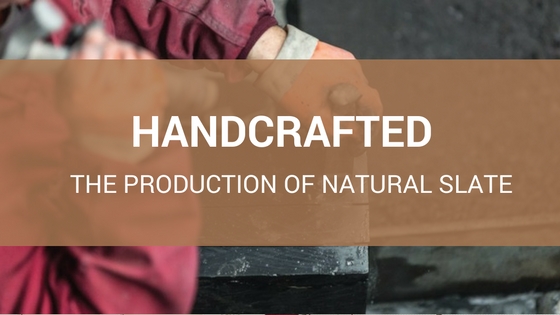 Natural slate is a gem of a building material. Fireproof, water resistant, and durable, the stone has an expected lifetime of over 100 years. First used in the days of medieval castles, natural slate is a high-quality material that is a favorite for high-end projects. 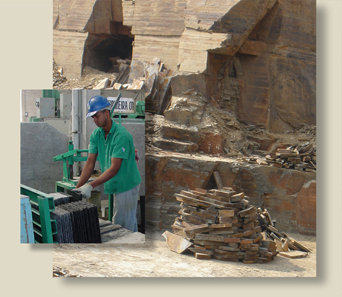 Unlike many other building materials, natural slate requires only minimal processing. Quarried out of the sides of mountains with diamond-studded steel cable, slabs of slate are evaluated for quality, sorted, and sawn into smaller slabs. Due to minimal factory processing, the release of harmful CO2 emissions are essentially avoided. No chemicals are applied to the stone, and natural slate uses even less water than terra cotta tiles.

These slabs of slate are then passed along to skilled craftsmen whose job is to split the stone into its finished thickness. Using a hammer and a chisel, slate is carefully split and passed along. 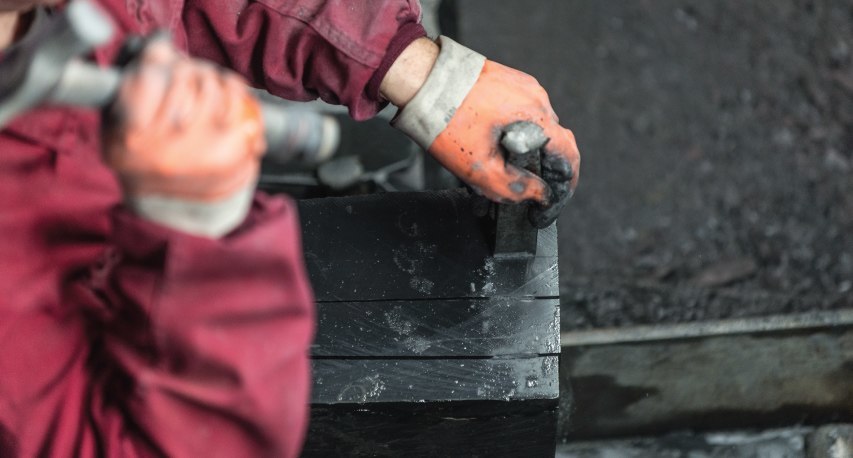 Being a slate splitter is more than just chiseling away at rocks. Each slab of natural slate is carefully examined to ensure the beauty and quality of this product is up to par. Prior to quarrying, the “overburden”— broken, compromised, or otherwise unusable rock— is removed. After being removed from the mountainside or tunnel, slate is then evaluated at the factory for any compromising flaws.

Problems to Look For

There are several different imperfections to look for when using natural slate— a high water absorption, which can lead to freezing and widening of cracks in the material. A low breaking strength, which will compromise slate’s legendary longevity. Too high of a calcium carbonate content will lead to pockets of “rusting”— an unpleasant, orange pigment will eventually bleed down the roof or siding structure. Slate splitters carefully examine each piece of slate and remove the troublesome pieces.

To read an interview with one of Spain’s natural slate splitters, click here. 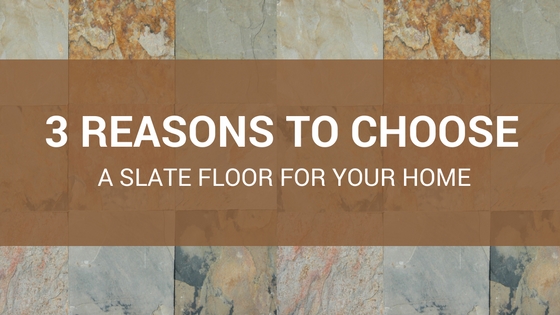 When selecting a flooring material for your home, there are several factors to consider. How does it look? How long will it last? How much upkeep does it require, and will it easily be damaged? 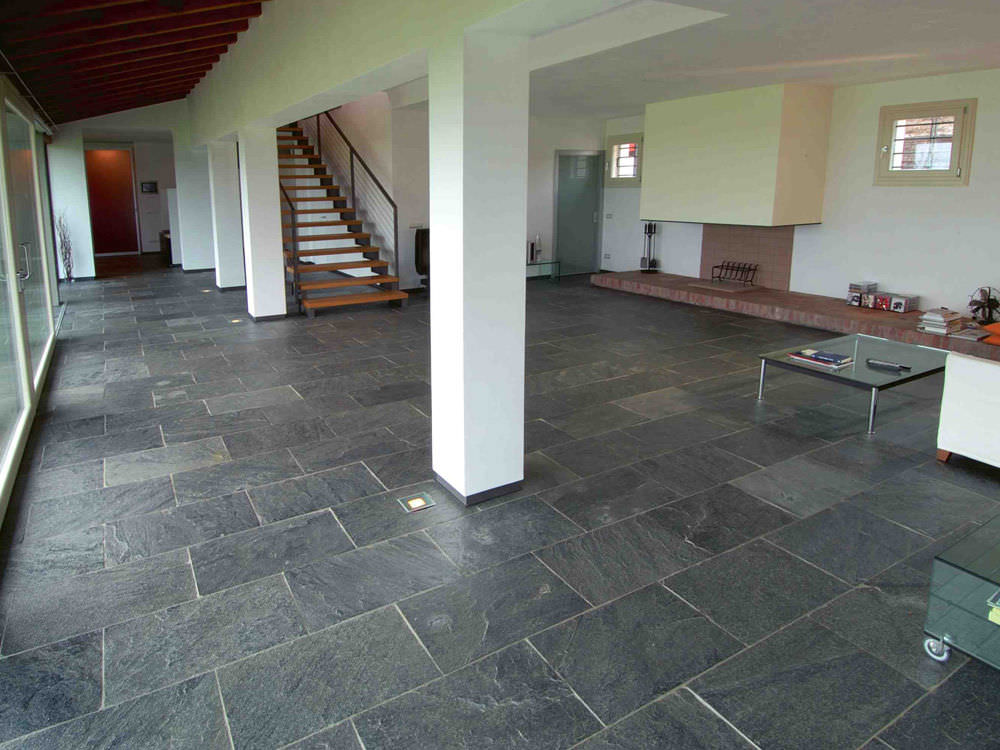 Slate tile flooring is a solid choice to answer all of these questions. Convenient, long-lasting and beautiful, it is a high-quality product that ads significant value to any home.

Slate tile is one of the hardest and most durable materials on the market today. In terms of flooring, it has a longer life and requires less maintenance than wood, ceramic tile, or linoleum. Not easily scratched or chipped, quality slate is also naturally stain resistant.

Slate has been used in architecture for centuries, first appearing on the roofs of medieval castles. Today, adding slate to any home is a sure way to boost its market value. Additions such as slate countertops and slate tile floors are valuable, chic home improvements that can give your home that regal feel. Slate comes in a rainbow of colors; there are the classic blacks, blue-blacks and grays, but then there are also hues of purple, green, red and browns. No matter the decor of your home, and whether you want your floors to pop or to blend in, slate tile will match your every need.

While this beautiful material can benefit any room, slate tile’s innate properties make it particularly good for certain functions.

Being non-porous and non-staining, slate tile flooring works excellently in a kitchen or dining-room setting. No more worrying about spilling wine, oil, or sauces— it is easily wiped right up. Even hot pans won’t mar the surface. 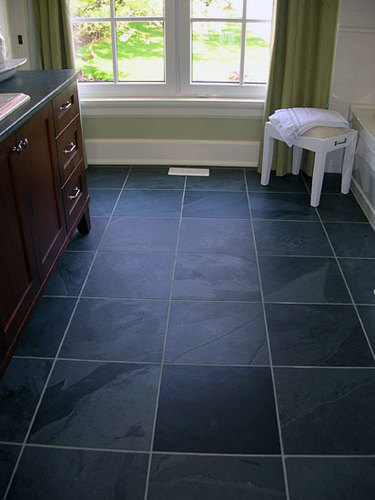 Waterproof properties makes it perfect for outdoor patios and bathrooms. Since no water can get into the stone, slate tile won’t freeze and crack. The stone’s textured surface also makes it very slip-resistant, saving you a dangerous fall out of the shower or a fallen kid on the patio.

If you have pets, slate is perfect for an “indestructible” floor. No mud will get clogged up in it, and no nails or claws— no matter how long— will be able to permanently scratch it. 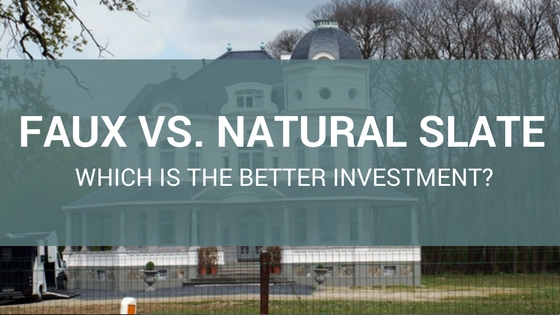 Faux vs. Natural Slate: What’s worth the Investment?

Selecting the proper roof for your project is no light decision. Indeed, the materials you put into your building can one day make the difference between costly repairs and maintenance-free bliss.

Natural slate is a classic and beloved roofing material that has been used since the days of medieval castles. If you love slate’s regal appearance, but cringe at the price, you may have looked into using imitation slate. Continue reading below to learn more about which product will best suit your roofing needs:

Natural slate has a lifespan that often exceeds 100 years. In comparison, imitation slate usually comes with a warranty of 50 years. Often made of recycled plastics or rubber, faux slate tiles are more susceptible to bending or warping. Many imitation slates have not achieved a “Class A” Fire Resistance Rating, the best grade a material can get in terms of fireproofing. 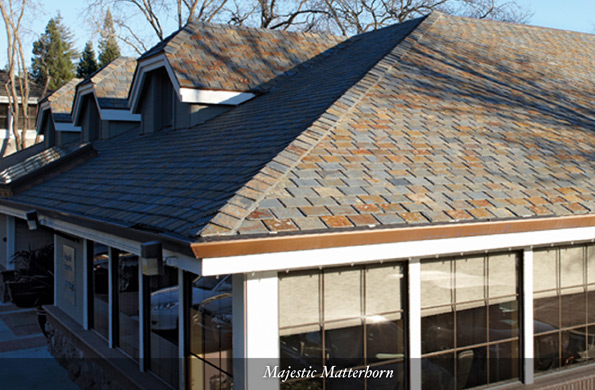 Comparably, natural slate is entirely fireproof, and has earned the “Class A” Fire Resistance Rating. It is also non-porous and water resistant, ensuring no fissures or cracks will freeze and widen in your roof. A hard material, natural slate won’t bend or warp, and is one of the best roofing materials to defend against hail.

Although synthetic slate may look like the real deal, it won’t be fooling any professionals appraising your home. 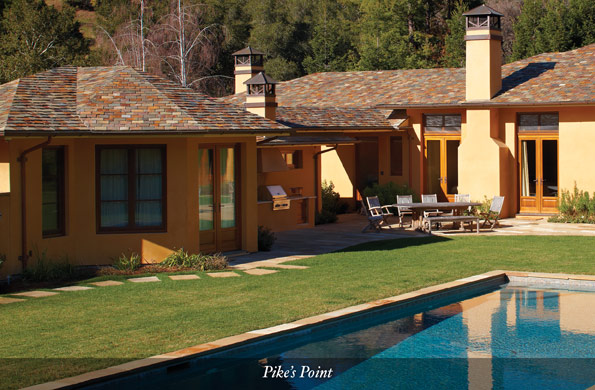 Being a high-quality product and solid investment for many reasons, natural slate can add value to any property. By choosing an imitation slate, you are— literally— selling yourself short.

We aren’t going to lie to you— natural slate is slightly pricier than imitation slate. Just like most anything else, however, you’re getting what you paid for. 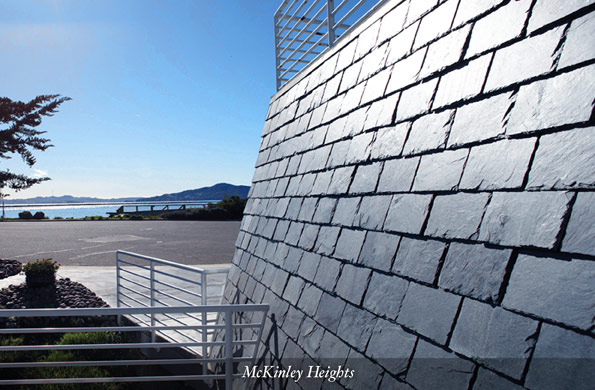 Taking into consideration all the previously listed qualities, natural slate is simply going to hold up better, providing value, reliability and piece of mind for any building. Once installed, it is essentially maintenance-free. Considering how much sooner imitation slate will need to be replaced, natural slate easily becomes the most cost-effective option. 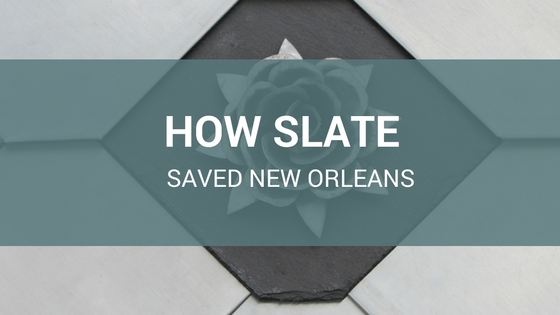 Today, New Orlean’s French Quarter is best known as a celebration city with prevalent jazz, great southern cuisine, and legendary nightlife. The distinct architecture, as well, ads to the city’s festive ambiance. A blend of Spanish and French influences, the tall buildings lining the busy streets are a gorgeous reminder of the New Orlean’s rich history.

Many of the buildings you see today, however, are not of the original architecture. Hundreds of years ago, New Orleans was saved by implementing slate tile.

The capital of French Louisiana began humbly. In February of 1719, Jean Baptisie Le Moyne, Sier De Bienville, commissioned 50 men to begin clearing land for a new settlement to be named “New Orleans”. By 1722, the new city had a population of less than 500, and was steadily growing.

On the morning of Good Friday in 1788, disaster struck the city. A devastating fire began in the home of Spanish treasurer Don Nunez and blew across the city, destroying most of the French Quarter. In only a few hours eight hundred homes and public buildings, including the church and town hall, were destroyed.

Just as rebuilding efforts had begun to take root, more catastrophes consumed the city. In 1794 another fire and two hurricanes demolished or badly damaged nearly all public buildings and homes. The fire alone had destroyed 212 buildings; while less than than the preceding blaze, these buildings were of higher value.

Governor Fancois Louis Hector, Baron De Carondelet, determined the cause of these rogue fires to be from chimney cinders. At this time, homes in New Orleans were roofed with wooden shingles. The close proximity of the French Quarter buildings ensured that the fires spread quickly and were nearly impossible to contain.

Slate Tile to the Rescue

Governor Hector’s solution to this issue was simple— begin building with non-flammable materials. He began to import slate tile from Cuba and other areas to use as a durable and naturally element-resistant building material.

To this day, many buildings in the French Quarter still have these original slate tile roofs, ranging between 100 and 200 years old. Sleek, elegant and unobtrusive, they can be credited in helping save one of the country’s most spirited cities.

To learn more about the Great Fires of New Orleans, click here. 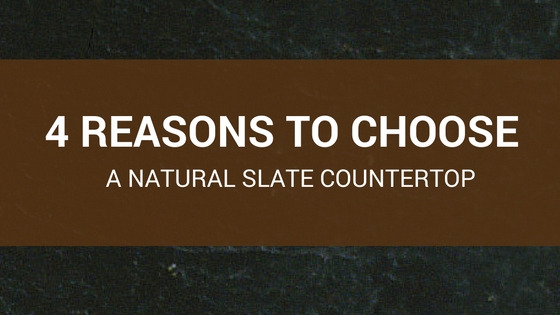 Natural slate has, for decades, been a reliable and high-quality material that ads value to any home. Recently, the popular roofing material has been reimagined to fit other home improvement needs.late countertops are rising in popularity among architects as an elegant fixture in high-end homes. Durable, long-lasting and complementary to any home aesthetic, natural slate is becoming a highly desired centerpiece for kitchens and bathrooms. 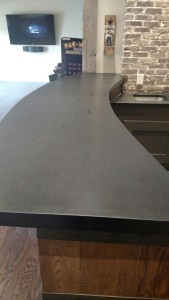 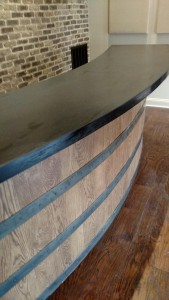 Natural slate has an elegant, handsome quality. Often, adding this material to a home instantly increases the building’s market value. Muted black, blue-black or grey tones stand out less than granite or marble countertops, blending easily into any style of decor. And while standard black is a popular choice, natural slate comes in an array of colors including shades of red, blue, purple and green.

Unlike concrete, granite and marble, slate is a non-porous stone. This quality makes it incredibly easy to clean, and avoids harboring bacteria like a number of other countertop options. Oils, juices and other damaging liquids won’t stain, and hot pans or irons don’t blemish the surface.

Marble, granite and quartz are popular counter options for high-end renovations. However, these materials can range from anywhere between $100 to $250 per square foot. Comparably, natural slate countertops usually cost around $50 and $65 per square foot. To the savvy homeowner or architect, this elegant, quality material is also a fiscally appealing choice.